Non-chromatographic Purification of Synthetic DNA: Short synthetic DNA analogs called oligodeoxynucleotides have applications in areas such as antisense drug development and genome assembly for synthetic biology studies. To be used as a medicine, large-scale purification of crude product is required. Currently HPLC is the most widely used method, but it is expensive for large-scale purification. For genome assembly, purification of massive number of oligodeoxynucleotides are needed. As a result, the ideal way to purify them is high throughput purification. Currently there is no suitable technology for the task. To solve these problems, we are developing non-chromatographic biooligomer purification technologies that are suitable for the tasks. These technologies are based on the novel concept called catching by polymerization. Crude synthetic oligodeoxynucleotides contain desired full-length sequences mixed with failure strands. To separate them, the successful sequences are selectively attached during syntheses to a polymerizable group through a cleavable linker. After synthesis, the crude DNA is subjected to polymerization in the presence of monomers. Only the desired full-length sequences are attached to the resulting polymer; failure strands and other impurities are removed by washing. The full-length sequences are then cleaved from the polymer and pure DNA is obtained by extraction. Alternatively, the failure sequences are tagged with a polymerizable group. During purification, they are polymerized leaving the desired full-length sequences in solution. The catching by polymerization method has also been applied for purification of synthetic peptides. Currently, we are advancing the method for isolation and purification of gene-length DNAs directly assembled on an automated synthesizer. The new gene synthesis method allows us to introduce nature and un-nature modifications into the gene and to study their effects on protein synthesis.

New DNA Synthesis Method Suitable for Incorporating Sensitive Functionalities Into DNA: DNA analogs that contain sensitive functionalities have applications in many areas including chemical biology, antisense drug development and nanotechnology. However they are challenging to synthesize because the most widely used technology requires treating the synthesized DNA under strongly basic and nucleophilic conditions to remove protecting groups and to cleave DNA from solid support. Some solutions have been reported to solve the problem, but a universal technology that can be applied for a wide range of sensitive groups is not available. We have developed a new technology to solve the problem. Instead of using protecting groups and linkers that have to be cleaved under strongly basic and nucleophilic conditions, we used a new set of those that can be cleaved under nearly neutral oxidative conditions. We have proven that sensitive groups such as thioester and α-chloroacetyl groups can survive such conditions. Currently, we are extending the method for the synthesis of sensitive RNAs, which include epitranscriptomically modified mRNAs and tRNAs. The accessibility of these RNAs will allow us to study the effects of various sensitive modifications on efficiency and fidelity of gene transcription and translation.

Mechanochemistry: In this area, we are interested in studying chemical reactions under mechanical stress. Many chemical reactions especially those that involve large molecules such as polymers, proteins and nucleic acids could be affected by mechanical force. However, such effects are currently under investigated. Chemical reactions caused by mechanical forces could also find applications in organic synthesis. Recently, we studied the mechanical strength of single 1,2,3-triazole molecules using atomic force microscope (AFM). We attached a triazole molecule between an AFM tip and surface. Pulling the tip split the triazole into an alkyne and azide and the force was recorded by the AFM. The study gave insights on the strength of single covalent bonds, which are one of the most important tools nature and human use to assemble materials. Currently we are working on improving the method for single-molecule studies. We are also interested in using mechanic force to initiate organic reactions. 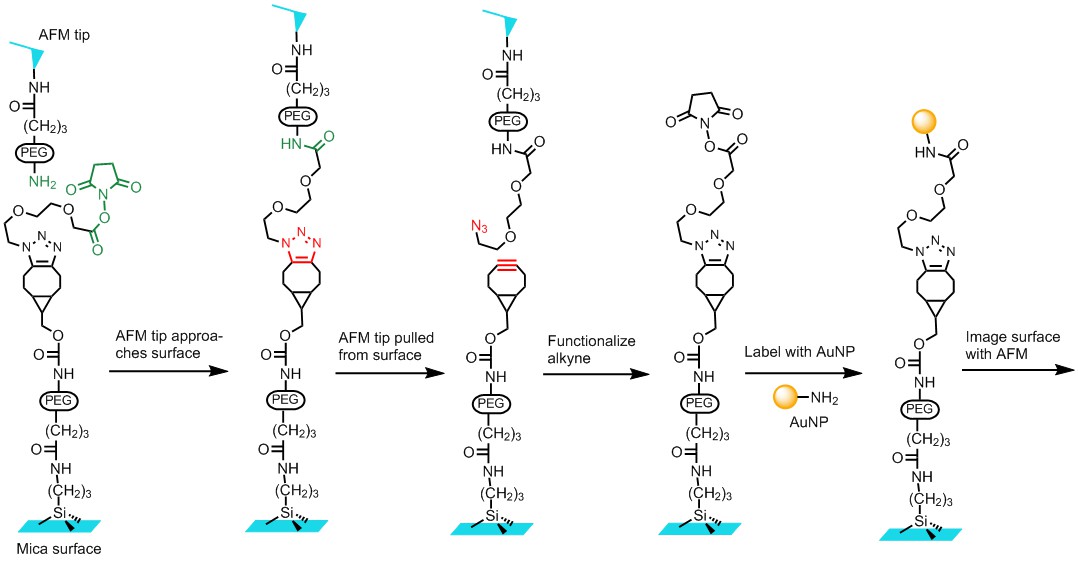 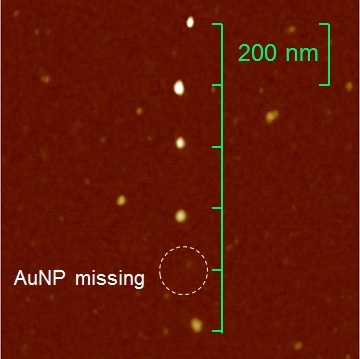