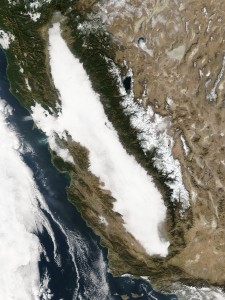 Atmospheric organic matter (OM) associated with aerosol particles significantly influences the chemical and physical properties of aerosol particles.  This suggests that atmospheric OM directly modulates the role that aerosol particles play in the atmosphere affecting the Earth’s climate.  Although uncertain, it appears the combined effects of aerosol particles may lead to a large net reduction in the solar radiation absorbed by the Earth’s surface thus masking the true warming of the greenhouse gases.  However, quantifying the magnitude of aerosol impact on climate is much more challenging than quantifying the effects of greenhouse gases.  This is largely due to the fact that many aerosols are not directly emitted; rather they are formed in the atmosphere from various precursor gases.  Identification of atmospheric OM is urgently needed to assess the chemical effect upon the physical properties of aerosol particles.  Atmospheric OM is transformed in the atmosphere by a number of chemical oxidation processes.  The transformations that increase the ability of aerosol to interact with water are the most crucial; therefore identification is focused on the polar organic compounds.   Since oxidation reactions are non-specific, this class of compounds is quite complex and spans the mass range of 100-1000 atomic mass units.

In this project, we focus on uniting the benefits of tandem mass spectrometry (MS) with the power of ultra-high resolution MS for comprehensive identification of atmospheric OM.  This will be done using a multi-step approach.  The first step includes a pre-screening of collected samples by ultra-high resolution and empirical formula generation.  The second step involves development of tandem MS methods using conventional instrumentation (recently acquired).  The third step moves the tandem MS analysis to a more powerful platform which includes an ultra-high resolution MS analysis of precursor and fragmented analytes from each MSn generation.
MS Student Jeffrey LeClair contributed to this project.